Athletes team up for fun

On Sunday 64 members were drawn into 32 teams to tackle the Elephant Park relays. During the team draw, visiting pocket rocket, Naomi Boynton’s name came out to be teamed with Mitch Williamson and everybody else thought they were then chasing second place across the line or maybe a win on handicap, unless there was a Steven Bradbury moment. True to form they (Mitch and Naomi) secured an almost 3 minute win over the 6 lap (3 laps each) course, stopping the clock at 20:25 for the almost 6km run. Leanne (ROY) Corcoran and Paul Centofanti crossed the line in second place in a strong performance ahead of the consistent team of Marc Kiho and Nathan Garton.

The handicap winners were the team consisting of Anna Daintith and Stewart Vidler who recorded a time of 30:06, to secure victory over William McLean and Monique Connolly and third placed Bailey Penrose and Daryl Roweth. Picking up the much sort after lucky draw prizes were, Ursula Wilson, Karen Neal, Ella Lamrock, Anthony Daintith, Stuart McGarva and Gary Taylor. A big thank you to the organisers, BBQ chefs and the timing guru’s for their efforts on the day.

Jack’s PB inspired 10:34 saw him secure the fastest 3 laps again and again Meg Reeves with a 10:50, was the fastest female and second fastest overall. Lawson Hamling also registered a very consistent 12:30 over the 3 laps to be declared the winner on the night.

This week’s run is at the picturesque Botanic Gardens with the normal 1 to 5 laps of the 1.6km course catering for all runners. It is a 9am start as usual and is part of the Banjo Pattinson Festival week.

A reminder to all, that the Colour City Running Festival is just around the corner now (Feb 28 / Mar 1), so if you are intending to enter you need to do so now. 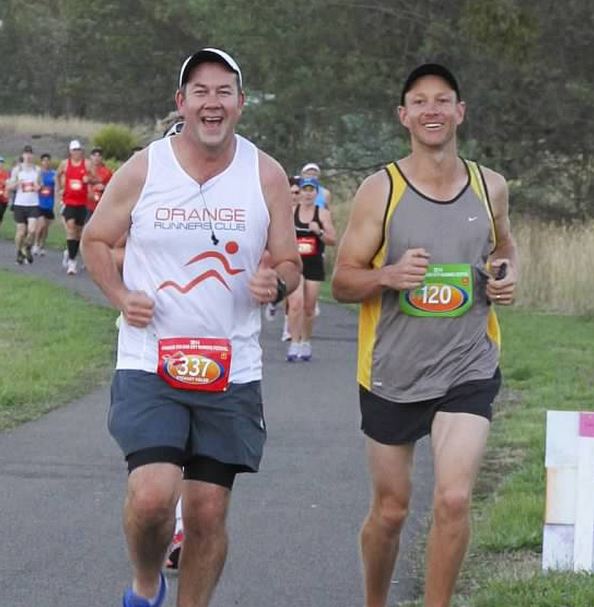 HAPPY FEET: Stewart Vidler (left, with Terry Baker during the 2014 Colour City Running Festival) was in the winning relay team with Anna Daintith.