Last Sunday 54 Orange Runners Club members braved the heat, wind and dust as they challenged themselves over the Clergate School course. Before the run started Tanya Connolly was awarded a certificate recognising her 300 club runs. Connor Whiteley and Kyle Ostini had a titanic battle over the 5km course, with Connor (18:36) finishing seconds ahead and picking up the overall handicap win along the way. President Frank Ostini was not too far behind the young guns to lead the rest of the 18 man field home. Amber Rich (21:31) again cleared away from the other ladies in the 5km run, with Penny Chandler and Suzanne Coulson-Knight running into 2nd and 3rd respectively.

The testing 10km run was a battle between another young gun in Brandon Connolly and the experienced and easy striding Brad Simmons. Brad (41:29) proving too good on the day to win by less than a minute as Iain McLean ran a strong race to not be too far away in third place. Of the ladies Pam Fullgrabe (63:31)  and Amanda Gregor ran together with super coach Graham Fahy to be first and second while Julie Chapman was the third runner home.

Over the shorter 3km run Kinisha Roweth (14:26)flew home and the quickest ahead of Kerrie Lindsay and Emily Pell while Emily’s dad Greg (15:07) was fastest of the males, with Liam Coulson-Knight and Noah Whiteley getting the placings.

www.orangecolourcityrunningfestival.com.au  is the location to find all the information about the Orange Colour City Running Festival.  Just less than two months away. So now you need to start choosing which event/s you are going to enter in – John Parson Hotels Brokers Marathon,  Athlete’s Foot Half Marathon, Bupa 10km, Hotel Canobolas 5km, Pete’s Car Wash 2km.  When you have entered as an individual get your team together in John Davis Motors Business Challenge, Southern Cross Austerio Sports Challenge or Waratah Early Learning Centre School Challenge.  Don’t forget for those really looking to exert themselves the Insane Challenge is your target.

This Sunday the run is at Lake Canobolas, so it would be good to see members out there running off that Christmas cheer.

The next Wednesday there will be no run on New Years Day.

It is a good time to make that New Year’s resolution / set your goals for 2014, be it aiming to do your first race, improving your runners Elephant Park time or just to stay fit by getting to as many runners club runs as possible. 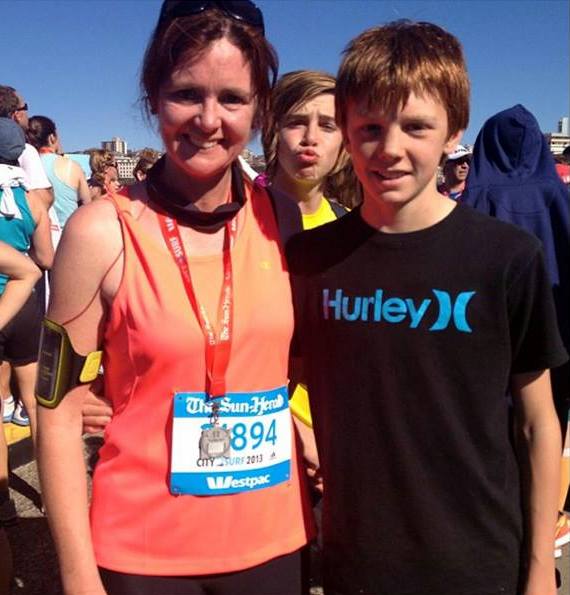 FAMILY FOCUS: Michelle and Connor Whiteley after this years City to Surf. Connor was the fastest over 5km last Sunday at Clergate