Sunday morning saw a slightly smaller gathering at Jack Brabham Park on a morning where the temperature was warm but promising to get a whole lot warmer.

Jamie Corcoran was rewarded with a certificate for achieving 100 club runs, along with a kiss from President Jane, which appeared to spur Jamie on, as he completed the longest distance of four laps (7km). Tanya Connolly (400 runs) was also presented with a certificate and certainly carried the family name on the day, with husband John, being dragged around the track by the family dog after a big night out.

Damien Harbrow (15:55) was the quickest over two laps as he outpaced the two Hugh’s, Daintith (17:20) and Corcoran (17:26), who picked up second and third place respectively.

Over the three laps or 5.25km distance Jack Daintith (23:10) was clearly the fastest, finishing in front of John Bowmer (27:40) and Russell ‘Great Volcanic’ Tym (27:57). In a great day for the Srzich family, young Grace was the fastest female over the three lap journey, beating one of the most consistent placegetters in Lily Craig (26:56). Mum, Michelle Srzich (28:16) rounded out the top three finishers.

Over the 7km distance there was 30 seconds separating the top 5 runners in a very competitive group. Ursula Wilson (31:08) set the fastest time, just in front of Amber Rich (31:28) and Leanne Corcoran (32:07). Of the guys, Paul Centofanti (31:18) showed the benefits of his recent hard work to finish a mere 3 seconds faster than magic Mike Cooper, while Dasha (31:34) was not far off the pace to be third.

On Wednesday around 90 runners members were out to do their laps around Elephant Park on another warm and dusty afternoon. Certificates were presented to the following runners for achieving personal milestones: Alicia Ross 100 runs, Ethan Crisp 100 runs, Sue Betts 100 runs and Jack Daintith 400 runs. In the running Nathan Sutherland (10:40) again put out the fastest time, while Estelle Dean (11:50) had a strong run to top the females list. John Connolly (13:56) showed no ill effects from the weekend, to capture the overall win for the night. Despite the tough conditions, there were some solid individual personal bests with Pip Farquharson 13s, Fiona Montgomerie 4s, Gary Holway 34s, Leah Morphett 1s, Jess Quinn 16s, Joanne Lim 3m14s and Val Gursky 16s.

For those runners intending to run at the Canberra running festival on April 9 and 10, there will be a book at the next few club runs so you can put your name down, if you would like to enjoy a Saturday Night dinner with other club members.

Sunday’s run is at Gosling Creek at 9am. 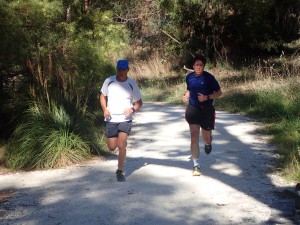