A big day last Sunday with two ORC runs back to back.  Starting off was the trail run at Fourth Crossing starting at 7am.  In the short course (6km), Anthony Daintith was first home in a time of 33.30, followed by Lachie Ross (37:23) and Jamie Corcoran (38.42).  Rhonda Jones was the first lady home in 54:36 and Alicia Ross undertaking the sweep role.  In the tough long course (13k) it was a close fought race with Sam Collins (1:14:13) first just ahead of Iain McLean (1:14:41) and Joel Broadfoot (1:16:16).  Leanne Corcoran ran a fantastic time of 1:28:12 not far ahead of Alison Spurway and Alison Broughton.  Thankyou to Brett Sammut for undertaking the sweep role.  Based on these times, expecting great results at UTA in May.

It was a redesigned course that greeted members for last Sundays 9am course (adding about 200 metres a lap).    In the 2.8k, Hugh Corcoran and Jack Daintith were tied for first with a time of 13:51 just ahead of the experienced Dave Craig (14:20).  Pocket rocket Lucy Jurd was first female over the line (16:01) followed by Mum (Kelly) and Mindy Smith.  In the 5.6k, Hugh Daintith held off all challengers to be first home in a time of 25:26 just ahead of Amber Rich (25:49).  Kiwi and Jai Anlezark were 2ndand 3rd of the men and Leanne Corcoran backing up from the trail and Penny Chandler in the women.  It was Gareth Thomas (42.12) who blitzed the field in the 8.4k (looking good for Canberra) ahead of the team of Karen Neal and Kelly Gleeson who finished a tick over 43 mins.  John Connolly pushing out another longer distance followed by the fast improving Michael Halls.  Anthony Daintith was a clear winner in the 11.2k with a time of 49:52.  Coop second home in a time of 58:19.  Ursula Wilson just finished ahead of Alicia Anlezark – well done ladies.  Congratulations to John Moss who was the handicap winner.  Mossy under the guidance and encouragement of the Club President battled out the 11.2km in a time of 1:14:01.

Raise the bat members – a massive turnout of 100 ran around Elephant Park on Wednesday afternoon.  Presentation was made to young gun Blake Gleeson who has completed 75 club runs.  Welcome to Wendy, Noah and Hannah Chapman who ran their first run with the Club.  Our handicap winner was Donna Irwin who ran the 3 laps in 18:20.  PBs this week were recorded by Oliver McLean (1 min 27 sec), Alicia Anlezark (26s), Oliver Hyde (31s), Hayden Hyde (1min 23 sec), Caroline Hazelton (12s) and Marie Regan (59s)

Tomorrows run will be hosted by Basil and Jean Baldwins property at Forest Reefs.  Choice of 3,5,8,11k distances and morning tea hosted by James Sheahan students to support their Sri Lanka mission team. 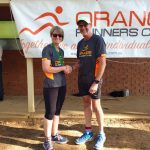