This week the Sunday and Wednesday runs were run in very tough conditions, with the temperature rising, making hydration a very important part of before, during and after the run.

On Sunday out at Bulgas Road at 9am it was 25+°C, the track was dusty and runners had to deal with the odd car, motor bikes and even a wild pig.

Iain McLean recorded the fastest time (47:00) over the 10km journey finishing just ahead of Peter Fox and Daryl Roweth. Anthony Ellison ended up 4th but took a bit of a detour and had an interesting encounter with the wildlife. Amber Rich (50:23) led the ladies home and was clear Kim Jarvis and Amanda Gregor.

The largest numbers of the day were sweating it out over 5km with Jack Daintith (20.53), leading the guys home, with Jono Garton second and Tony Fitzpatrick third. Kerrie Lindsay (29.14) was the fastest of the ladies, while Lynda Chapman, Sharon Fahy and Glenys Rosser finished together in second and equal third, before seeking the shade beside a nearby parked car.

Speedster Brandon Connolly (11:59) cleared out from the field in the 3km run with Alistair Merrifield looking slick and running into second ahead of Noah Lamrock. Young star Ella Lamrock ((14:33), ran strongly to beat home overall handicap winner Rebbeca Murphy by a minute and Ellie Williams was not far away in third place.

Wednesday nights run at Elephant Park saw a stifling 34°C temperature, a smaller crowd than usual and a bridge under repair that caused a change of course. Runners had to divert down along the swimming pool fence and cross via the pool bridge, doing 2 laps instead of 3 and adding an extra 300 metres to the total run. To regular Wednesday runners, despite the heat, the change of track added a little interest to the run and some strong performances were observed. Long striding Nathan Sutherland was the quickest with a solid 11:56 time, while Liz Simpson (13:08) was the quickest of the ladies and Ursula Wilson (14:25) was not far away as she took the overall win.

One week until early bird entries close. Get in early and you could win an early bird prize an Electrolux Fridge, Balloon rides, vouchers are just some of the wonderful prizes available. For all those kids out there Happy will again run in the Pete’s Car Wash 2km Junior Dash on Saturday Afternoon. Hotel Canobolas 5km, Bupa 10km, Athlete’s Foot Half Marathon and John Parson Hotels Brokers Marathon are on Sunday.

Check our the website for details www, orangecolourcityrunningfestival.com.au or call in and see Helen at the Department of Sport and Rec. McNamara Lane.

This Sunday runners will be out at Bargwanna Road (9am) 3km, 5km and 10km distances. It is a watch free run, meaning, you don’t wear your watch during the run and before you set off you try to estimate your finish time. With the person who’s finish time is closest to their estimated time winning. 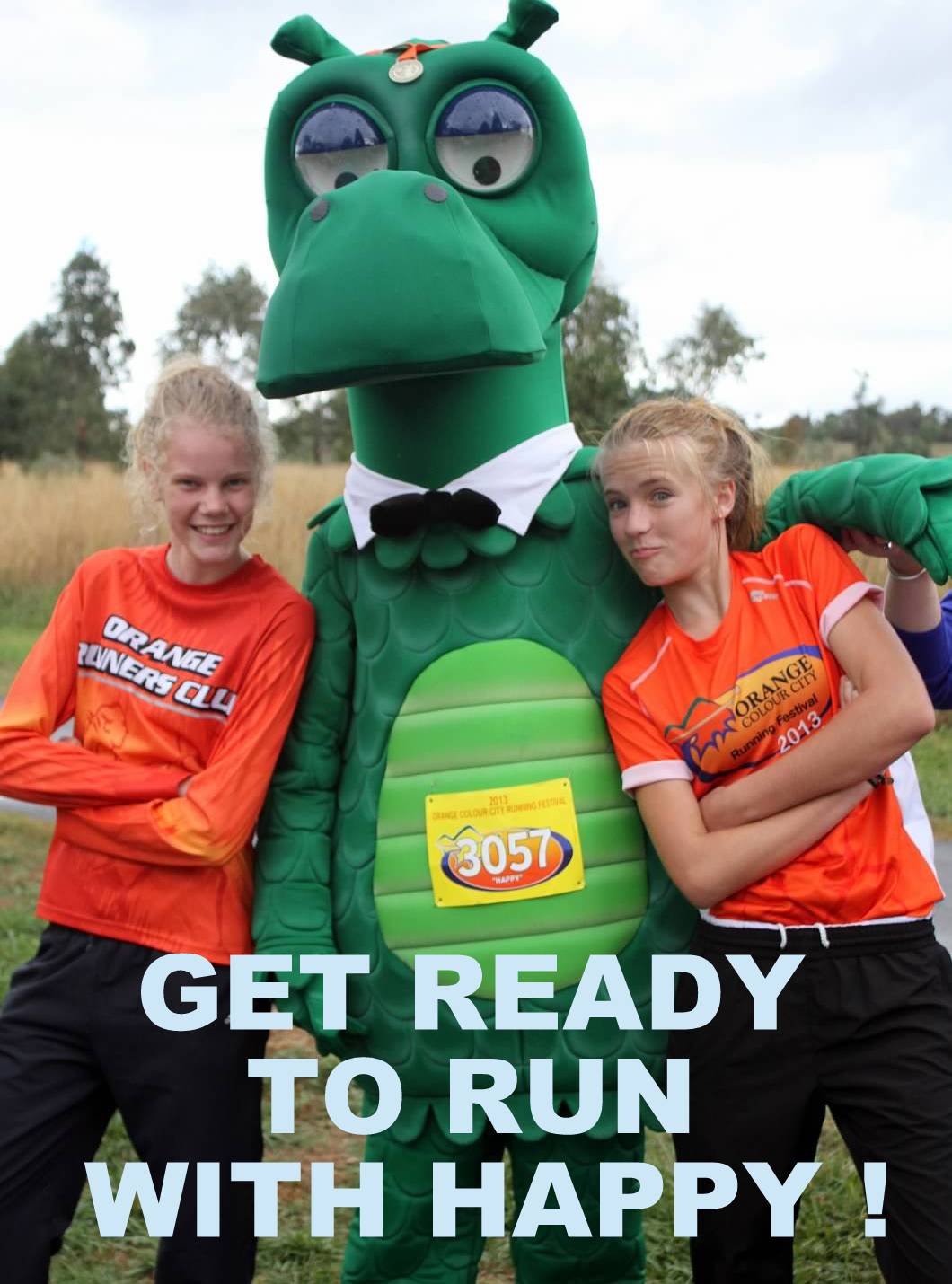 ARE YOU KEEN? Alice Bowmer and Kinisha Roweth with St George Dragon prepare for the Orange Colour City Running Festival next month.