Whiteley on track for national run

On Sunday, before the Bulgas run, Martin Ryan (400) and Wayne Fahey (100) were recognised with certificates acknowledging achieving their respective milestone number of club runs. Also our President Jane Fairgrieve made a special presentation of some financial support for outstanding young athlete, Connor Whiteley, who has qualified for the National All Schools Cross Country Championships next month. This achievement is a great reward for this dedicated and talented sportsman. I have listed some of Connors running history plus a few details on his efforts to qualify for Nationals.

Connor joined Orange Runners Club in 2008 when he was in Year 3. He has completed over 300 runs with ORC and the Whiteley family week is structured around the Wednesday afternoon Elephant Park run. Connor spent many years running with Frank and Kyle Ostini, completing countless reps up Mt Canobolas and Old Forbes Road. He also enjoys running with the early morning crew on Saturday’s. Connor has competed at PSSA /All Schools Cross Country since 2010. This year, after returning from competing in Bendigo at the School Sport Australia Triathlon National Championships he was determined to qualify for Nationals in Cross Country. He trains 6 days a week with Mel Ashton doing a variety of sessions including running, cycling and swimming.

On Friday at the NSW All Schools Cross Country Championships, Connor started well and was up the front with the lead group early on. About a kilometre into the race, he tripped and fell over, slightly twisting his ankle in the process. He quickly returned to his feet and was determined to get back with the lead group. His determination and adrenalin saw him achieve this as he continued to gain back the placings he lost due to the fall. He completed the 4km race in 5th in a time of 14.13, securing a spot in the State team and his first appearance at Cross Country Nationals. Connor will travel to Albany Western Australia in August to compete in the individual event on August 23 and a teams event on August 25. He is very grateful for the continual support and encouragement he receives from ORC members.

From Sunday’s actual run Connor (Whiteley) ran with little brother Logan into equal first place with a time of 15:55 to finish a few seconds faster than Michael Sharp over the 3km course. Amber Rich (13:32) again powered away to finish clear of Caitlin Prestwidge and Tanya Connolly. In the 5km run,  and not to be outdone by the boys, dad Aidan Whiteley was the fastest with a 22:10 as he finished just ahead of Jack Daintith and Noah Lamrock. In a strong ladies top 3, Ella Lamrock was the quickest with a 22:51 with Ursula Wilson and Laura Auberson finishing not that far away. Leanne Corcoran (46:06) was a standout in the 10km, following on from her stunning run in the Gold Coast Marathon with the fastest time overall and many minutes in front of the majority of the field. Of the ladies Julie Hudson came home second and Jane Fairgrieve third. Trail runner, David Ross was second overall and first male home, with Daryl Roweth and Anthony Daintith filling the placings. Paul Centofanti was the overall winner as he completed the 10km in a solid 53:06.

Wednesday nights run saw a change to the course due to the condition of the track with 5 short laps being a bit longer than the normal run distance, but very close to the 3km mark for the 100 plus starters. Brad Simmons recorded the fastest laps with a total time of 10:35, while Cassie Harvey was declared the overall winner with a time of 19:33.

Steven Cooper ran the only Personal Best of the night with a 23:34 which was a 49s improvement.

Some upcoming events include, City to Surf (10th Aug), Mudgee Running Festival (24th Aug), Dubbo Stampede (7th Sept) and Edgell Jog (7th Sept), so if your looking for an event one of these might suit you.

On the Mudgee Running Festival and as per previous years we have made a booking for dinner at the Oriental Hotel on Saturday night 23 August.  It would be great to see plenty of members attend the dinner and if you are interested  please give your name to Jane as soon as possible.

This weekends run is at Bargwanna Road and includes 3km, 5km & 10km distances. 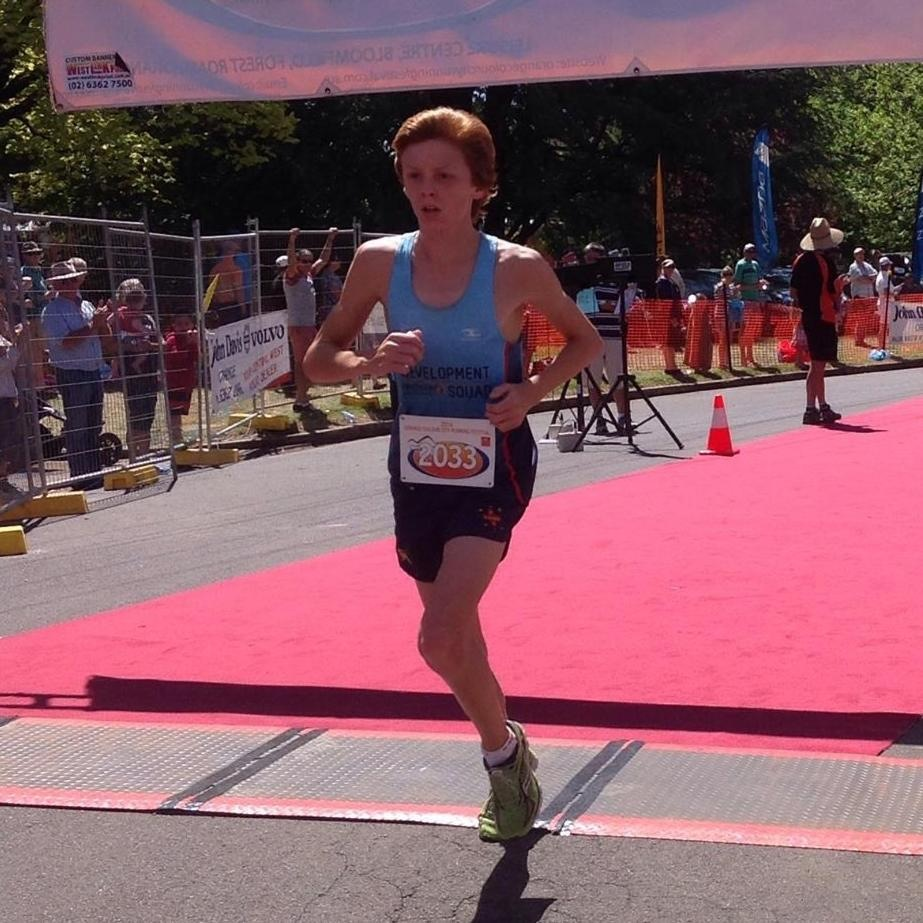 BIG STEPS: Connor Whiteley has qualified for the NSW team to compete at the School Sport Australia Cross Country Championships next month.